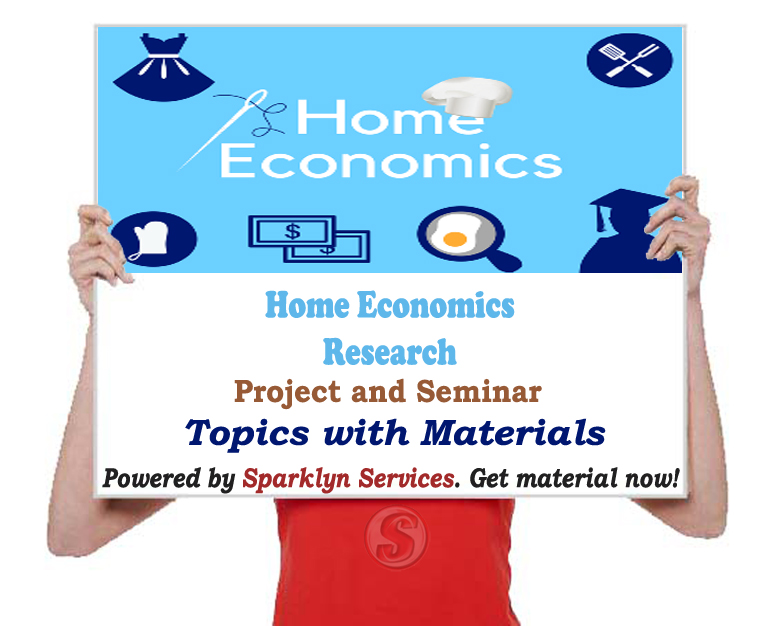 This research work titled "Influence of Home Environment on the Academic Performance of Senior Secondary School Student" is dedicated to God for his enabling grace and to all computer enthusiasts who help to make life a pleasant experience.

I owe my indebtedness to my Supervisor (Name of your Supervisor), the Head of Department (Name of your HOD), the Lecturers in the department of Home Economics, Book Authors and Profound Scholars of existing/related research work for your moral support that facilitated the successful completion of my (Tertiary Institution level). I am grateful to God Almighty and my parent for their financial support in my career. I really appreciate you all for everything, Thank you very much.

This work sought to investigate how the role played by home, directly or indirectly affects students academic performance. To investigate this therefore, we conducted research in some selected secondary schools in Enugu North Local Government Area in Enugu State. To determine the difficult problems surrounding the disparities in performance of students from different home and effect learning environment has on education achievement of students in Enugu North Local Government Area. The instrument used to obtain information were questionnaires, the data collected were analyzed in form of mean and percentage.
The findings show that home environment consist of a set of physical, socio-economic and psychological elements that affect performance of students both positively and negatively. These elements and condition were level of academic status of parent, financial stability of the home provision of the educational material for conducive learning. The study therefore like give solution to parents, teachers, government and society opportunity to identify on how to deal with problem from home in relation to academic performance of Nigerian students in Enugu North Local Government.

Introduction
Background of the Study
Nigerian environment is associated with unclassified problems entangled with impoverish outlook and being devoid of most modern facilities and infrastructure that could sustain an urban area. This is clearly manifested on the standard of living and the contribution of the people towards national development.
This circumvented problem in the rural areas has adverse effect on the students' academic performance. It is imperative therefore to exhume the associated rural problem that affects their academic achievement with the prevailing order in the educational arsenal. Most often than not, there has been persistent cry about the state of intellectual attainment in the school system. This cry does not include only student's performance in the rural area but in the urban as well.
Environment according to Oxford Advanced dictionary is the natural conditions like land, air and water, in which people, animals and plants live and also circumstances affecting their life. Environment can be physical or psychological. Physical environment deals with material aspects such as infrastructure, availability of resource facilities. The psychological environment includes the home, school community and significantly other people in our lives such as parents, peers and siblings. The quality of our home is very significant; some have a history or tradition of formal education and modern influences, while some are not so well equipped. The gadgets, resources and facilities in both types of home will influence the learning processes of children born in these homes.
Studies have shown that if a child lives in an impoverished environment for the first four years of life, he is likely to lose as many as, in reading knowledge and skills, general knowledge and skills. “The environment” provides the necessary conditions for both physical and intellectual growth. The African child has often been hand capped by ill-health, lack of motivation, nutritional deficiencies, and unfair criticism. This hampers his intellectual development considering as such treatment invariably result in negative self-concept.
“Home” is where the child, the parent or guardians live and from where the child set out to and fro to school. Home is first enduring environmental factor in promoting readiness for school work in the child. This is because parents or guardians in the home are children first teacher. From the day a child is born and begins to hear, he or she begins to develop literacy as parents and other caring adults and pre-school teachers speaks, play, sing and read to them. As a child he moves from infant to toddler and then to preschooler, he learns to be able to read, write, listen and speak.
Early literacy development is a significant part of preparing children to achieve academically. Basic literacy activities that are associated with children's engagement with texts and success in reading were identified by literacy researchers (Dickinson and Tabors, 2001; Wasik and Band 2001) includes; oral language development, which includes book reading, phoneme awareness activities (acquired through nursery rhymes jingles poetry, and books that contain words with rhymes). And exposure to alphabet.
The influence of parents especially, Mothers on children early literacy acquisition and subsequent school achievement is well documented in numerous studies (Trusty, 1998, Yan & Lin 2002; Godden & Ray 2003). Research shows that greater parental involvement in children's learning positively affects the child's school performance including higher academic achievements (Mc Neal'1999; Scribner, Lin 2003); and greater social and emotional development. Parents not only provide good learning experiences, and through talking with the child, sharing experiences and teaching but also help to organize a child's learning experiences.
Also, children with richer home literacy environments demonstrate higher levels of reading knowledge and skills than those low academic exposures. Psychologists have also discovered from various studies that heredity goes a long way to determine a child's intelligence and consequently the level of his academic performance in a given environment. Those children whose parents are noted for higher intelligence quotient are bound to inherent such traits through genetic transfer and such children are sometimes referred to as a chip of the old block.
In conclusion, parents contribute a lot to the academic achievement of their children in school, it is assumed that students from homes that do not have interest for education tend to perform poorly in their subjects like chemistry, Biology, English Language, Mathematics, Igbo language, physics. This is because they lack encouragement and incentives from parents which affect them negatively. Therefore, the home is expected to provide a good atmosphere to enhance students learning.

Statement Of Problem
Most people hold the view that home environment of a child affects his academic performance. Today, most parents are not highly involved in early academic acquisition of their children. In the home mothers are the first teachers, they are care giver and minder of the child during the critical period of their development, though fathers do as well (Brim hail and West, 1997; Gadson and Ray, 2003). The problem arises from the fact that the jobs of so many parents are so demanding and this may explain why they do not have ample time for their children. Some parents are either unable or refuse to provide the basic need of the child due to the socio-economic attainment existing among the various homes in highly civilized areas and this also affect the academic performance in the school.
Many conflicting views have been expressed by various authors as the factors that are responsible for this poor standard of academic performance of secondary school students. While some blame this poor performance on the government inadequacy in fulfilling all it's obligation towards education. Others maintain that teachers are responsible for this state of affairs.
The thrust of this project is to critically examine and analyze the effect of home background on the academic performance of students. Though this research carried out elsewhere, little or no effort has been made in the past to carry-out this research in Enugu North Local Government of Enugu State. This work seek to investigate how the role played by the home, directly or indirectly affects the students' academic performance.
To investigate this therefore, the following will be considered;

Significance of the study
This study will give the government and parents the opportunity of knowing from the public how to deal with problems arising from home in relation to education. It will help the school and policy makers to find out the effects of home on the academic performance of student in secondary schools.
The finding will also be of benefit to both teachers and guidance counselors in their respective planning for instance, establishing a relationship between the academic qualifications of parents, marital set- up of home, parents and children relationship and the academic performance of students. The study will go a long way to letting the authorizes concerned to be aware of the effects of socio-economic background on the student's academic performance.

Scope of study
This research on the influence of the home background on the academic performance of students is carried out in Enugu North Local Government Area of Enugu State.
There are about fourteen (14) secondary school in this local government area. However, as a result of time factor, finance and transport constraints the researcher could not go round the secondary school in the local government area to carry out the findings.
Consequently, ten (10) secondary were sampled, where the research beliefs could get authentic data for the project

Research Question
The research questions to be answered in this study are;
…

Influence of Home Environment on the Academic Performance of Senior Secondary School Student Complete Material can be acquired by placing an order for the material which will be sent in Microsoft Word (MS-Word) Format and the cost of acquisition is ₦3,000.

The displayed research work titled "Influence of Home Environment on the Academic Performance of Senior Secondary School Student" is stated as a research guideline towards accomplishing your assigned project / seminar research work. All the research materials on this website are ONLY for research purposes and should be used as a guideline in developing your research work. For no reason should you copy word for word as Sparklyn Services (sparklyn.com.ng) will not be liable for any who copied the material.
By ordering the complete research guideline, it signifies that you've accepted our terms of service.

Know your Project / Seminar Work (Influence of Home Environment on the Academic Performance of Senior Secondary School Student): Here are the key point to study if your work is cumbersome or not.